We had a family who came by today from Holland Village, wanting to adopt kittens to add to their human and animal family of two kids and three dogs. After interviewing them, they were found to be experienced with handrearing very young kittens, so I brought Pudding and siblings down to the shop for them to visit as well.

They decided to adopt Pearly and Peppy! Afterward, they brought the brother-sister pair to the vet. We briefed them again on the huge responsibility that such young kittens bring to them, especially since they are still nursing a smidgen of the flu’ and their need for 4-hourly feedings. Without their mother’s milk they have a lack of antibodies that makes them very susceptible to disease and death. We also briefed them on our adoption contract and got their picture! – 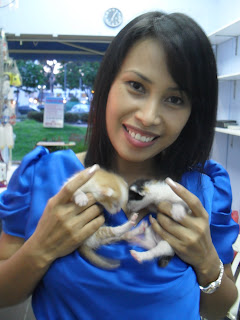 Paddy (red/white bobtail) and Pudding (red bobtail) the two brothers left are now back in my house, just gave them their 8pm feeding of KMR milk plus vitamins. I have been cleaning and dosing their eyes with Terramycin (for conjunctivitis) and they are now sound asleep – when they are awake, they are really vocal! Will update more on them soon.

Coffee and Layla are still waiting for good homes. Do spread the word and abolish the misguided view that older kittens aren’t as trainable or adoptable. In another few weeks’ time, should they still not be re-homed, they will be released as Ubi strays and sterilised.