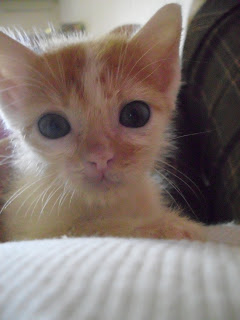 Paddy got adopted today! It all happened when Bun, now known as Brownie, came to visit us purportedly because her family initially had to temporarily migrate to Canada and Brownie might have had to be re-homed again. As it turns out, Canada rejected Brownie’s mommy’s visa, so the family is staying in Singapore and came to take Brownie home for good. When they came to visit us, they unexpectedly fell in love with our darling Paddy and decided they would adopt him as a companion for Brownie.

So we showered Paddy and trimmed his claws just now to ready him for his new home, and we were all gathering around him to tell him we would miss him! All of us are showering him with hugs, even Uno who has come to love Paddy as a younger brother. Here is a picture of Andy cuddling Paddy – 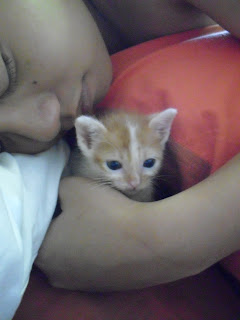 Paddy is by far the only kitten I personally hand-reared that I have immense feeling for, so needless to say it would be hard to say goodbye for him. The good news is that his new home is going to be great – with Brownie for company, and his family has already got them a new kitten pen to help give him easy access to the litter tray and food, since he is so small.

Here’s a picture of Paddy with his new family! 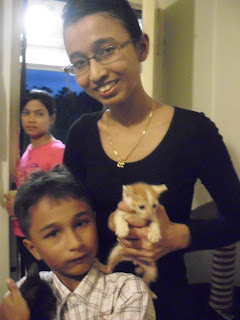 Because Paddy is still having watery stools, we showed his new mommy how to dose him with antacid syrup and anti-diarrhoeal tablets – his new human mommy is a nurse – and they will be taking him to the vet when they vaccinate Brownie. Paddy looked really happy to be cuddled by his new family and we are happy for him too!