Here is what Paddy looks like now! He has a habit of staring at us with his big round eyes – 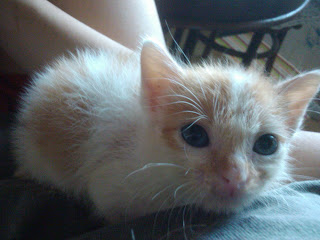 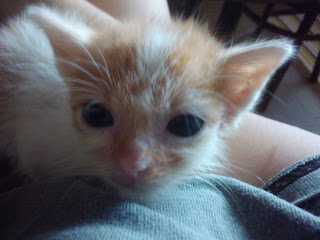 Paddy was found dumped outside Angels with his siblings and three hamsters, and subsequently re-homed, and returned to us when the adopter had to leave the country. Paddy came back to us with diarrhoea and abrasions but has since recovered nicely – we had to apply medication to his abrasions to prevent infection. He is still on diarrhoea medication, and we already weaned him off milk. We have been training him to learn how to eat dry food slightly moistened, which he still prefers with canned food but has adapted to. He has also recently learned to lap water out of a bowl, so he is getting enough moisture without canned food.

Paddy is really cute when he stares at you with his huge round eyes and just adores sitting still on your lap. His only quirk is that he still hasn’t gotten used to the litter box completely, but with supervision he usually does it in the box. He makes really yummy noises when he is eating too, another adorable trait of his.

Paddy is ready for adoption and if you are keen on visiting him, drop me an email at ubikuchingproject@gmail.com or text at 90880675 to arrange a visit.