On Friday I had a small note slipped under my door from Marine Parade Town Council, one that had my unit number on it and said it was regarding: CATS issue. On that same day, Andy found this notice pasted on the wall below our block, and promptly removed it and brought it to me to show me – 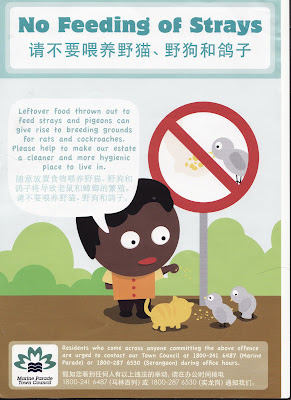 It says feeding strays – stray humans included I reckoned, it didn’t specify in English what sort of strays – is illegal. Oh well, I guess I will never offer to buy a drink for any poor destitute demented senior citizen again. The best part is it says its an offence, that anyone who is seen feeding strays should be reported, not to the police but to the Town Council itself.

I guess the Town Councils have become criminal legislature enforcers. I never knew we had a new police force in Singapore. I certainly ought to inform our wonderful policemen that they are no longer the law enforcers of this country.

I think the Town Council folks must have visited me because I reported to the lovely policeman at Geylang NPC that my cat feeding station items were stolen. Now that is a crime, theft. But no, appreciating nature, acts of compassion towards ‘strays’ and the homeless, are criminal acts that can be prosecuted by my-oh-my the Town Council.

If they were to visit me and Andy again, I would tell them the following:

And if they were to do anything drastic, I am going to call it my Paddy Chew moment where I put aside my dignity for the cause against the dreadful, archaic concerns of the misconceptions and laws in our country and make a sensational scene for the public to become aware of the ridiculousness of the situation.

By the way, feeding of stray cats is not illegal. See the poster below created by the cat advocates of our country, Cat Welfare Society. 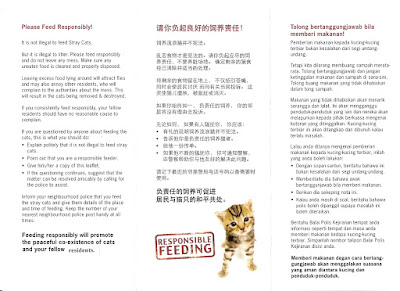