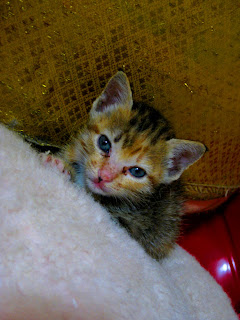 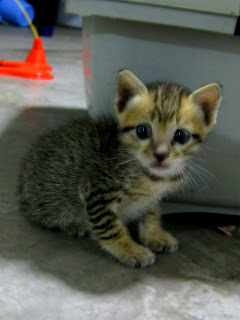 Helianthus & Amaryllis are around two-month old. They were found dumped in a box at a quarry in Pulau Ubin. The box was placed precariously next to the quarry, and it seems apparent to the person who discovered the kittens, that whoever dumped them there, were attempting to drown the kittens as well. The person (unknown) rescued the kittens and left them in the care of the NParks office staff.

2 of the girls who were intern-ing at the NParks office, were tasked to bring the kittens back to mainland(SG) as it was unsafe to leave the young kittens there where wild dogs are known to have bitten some young puppies to death as well.

They are currently in SG now, boarding at a fosterer’s house. They are found to be extremely healthy, proof that someone has unkindly taken the kittens away from the mother cat. However, because they have been taken away from their mother by force, both of them aren’t doing well now. Amaryllis isn’t responding to neither food nor drink, and the fosterer has to give her a special diet as well as nutritional gel to keep her strong for now.

Helianthus on the other hand looks like she’s coming down with the flu. However the fosterer is feeding her with Vit C for now.

The fosterers of these two rescued kittens are financially unable to provide the kittens with foster care for much longer. To visit, adopt or financially contribute,

Do also spread the word so that homes can be found for these deserving kittens.

Update: Helly and Amary are coming to our Love Kuching foster home this Thursday night. As they are currently ill, they will need to rehabilitate before they will be ready for adoption. We will update on their state of health after they arrive at our foster home and post on their adoption availability as soon as they get well.

Update: The kittens have recovered and are ready for adoption. Because they are now well, they will be staying at the current foster home and can be visited for adoption there. Contact Cailing (contact info above) to arrange visit for adoption.