About two hours ago I received a call from Edmond who works at Ubi Techpark, saying that he found a lone kitten near the canteen of the Excalibur office building, same area where we rescued Macy and family earlier this year.

When I arrived on the scene to investigate, the kitten was found to be inside the building’s sprinkler control valve room which was locked and inaccessible to humans.The kitten likely was either born there and then abandoned by his mother when she moved, or that he strayed inside on his own and didn’t know where to find his mother after. 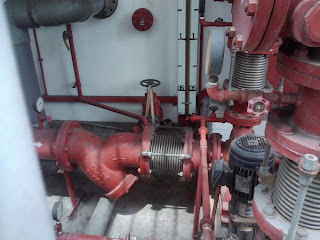 Edmond went and got the security guard to open the room and I climbed in to try and get the kitten, who was meowing away. He escaped out the room and Edmond and the guard managed to help trap the kitten and then I placed him inside the carrier I brought. 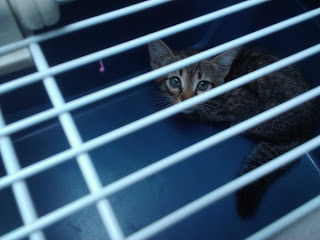 The kitten, who is now named Mack, is a brown mackeral tabby boy, about 6 weeks of age. Initially, he was very feral, had a number of fleas, kept biting me when I was showering him and drying him. After burning some lavender essential oil he calmed down. Now he has been defleaed with Revolution Pink donated by The Water Dish, claws trimmed, and is cuddling with me as I type this update. 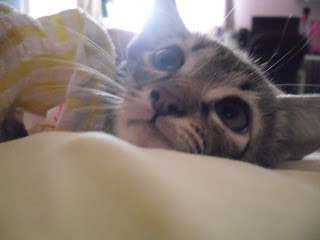 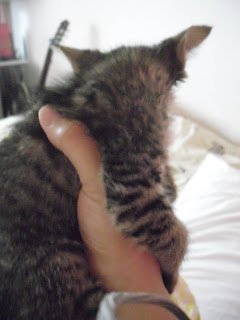 His fur is nice and plush and he is healthy aside from the fleas. He doesn’t really know yet how to eat on his own, fed him some milk instead because he didn’t want canned food – Nutripe Ocean Fish. Will try mixing the canned food with the KMR milk instead for him.

Unfortunately we don’t have a free boarding pen now for him to litter train him and teach him to eat solid kitten food, but we will find a way to house-train him! Once he is house-trained Mack will be available for adoption!