Today we went and bought furry cloth from Spotlight, at $24.95 a metre, and I cut a piece to line Helga‘s pen‘s second level.

Here is what it looks like before the furry-decor: 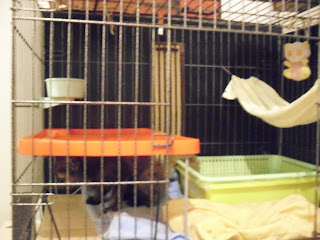 For those of you who are curious, the red level is simply a bed-top table purchasable from Ikea or Giant for about $10 or less. We secured the legs of the table to the cage itself with cable ties. It is where Helga eats and drinks from and sometimes lies to sleep if she feels like being on higher ground. Below the pen, from left to right: two ceramic tiles which Helga lies on when she feels warm, a fleece blanket from Shop n Save which costs $4.99 (also available from Ikea), a homemade pillow, and above her litter box a homemade hammock which Helga is not keen on roosting in but it acts as a modesty shade for her when she goes to the litter box. Behind the pen, the black boards are meant as a litter guard and to protect the cat from the wires behind the pen as there are sockets there.

So the fur. I cut a piece that can be draped over the second level, and here is what the pen looks like now – 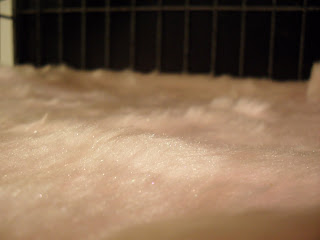 The furry cloth which we bought 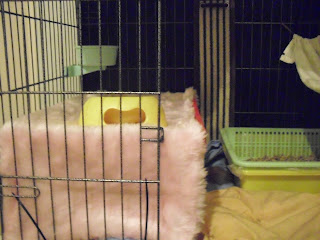 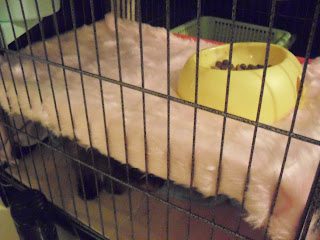 Draped, not taped though, over the second level, cut to size with some extension so that it can be held in place by tucking the lengths between the table and the pen. Not taping it down makes it easy to remove and launder. 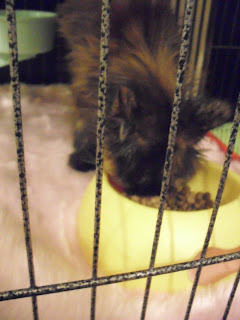 And voila. Furry-redecoration complete. Still have lots of pink furry cloth a la Hello Kitty left, so will use it for more DIY cat furniture decorating.