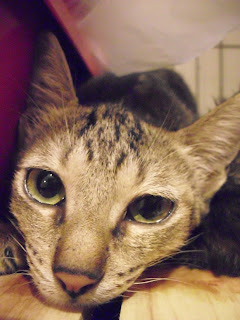 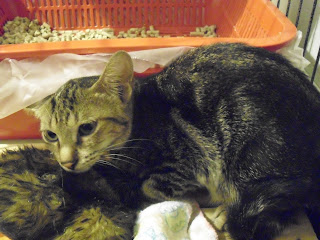 This is Serval, one of the kittens we rescued from Joo Chiat Complex. He is a bit older than the age that gets easily re-homed as a pet kitten, but the younger ones were inaccessible hiding under awnings, on rooftops. He is a 9 weeks old classic tabby kitten. We assume he is male for now because we haven’t yet been able to hold him long enough to sex him, but he looks like a boy from his size and features.

Serval is still very feral, in constant attack mode (both Andy and I have been bitten and scratched by him) and hasn’t gotten used to being indoors yet. He has eaten a little – Fussie Cat Seafood for the smell, with vitamins added to boost his appetite. He has one eye that seems teary, so we have been cleaning it for him, but he hasn’t known us well enough yet to let us wash his eye with ointment.

As for his stress, he hasn’t really responded well to the scent of catnip, and he won’t allow us to feed him the Pet Ease paw gel. The Feliway diffuser has been refilled and is in the air, and am thinking if we should by the Feliway spray for topical application in his pen to calm him down further.

Will report more on him as he rehabilitates and undergoes socialisation. His appetite is gradually returning and is now chomping on Solid Gold Indigo Moon kibbles as I write this.