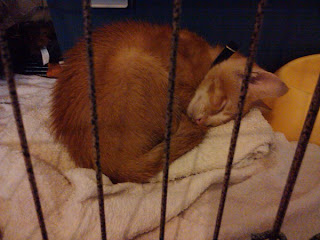 Sam is doing much better by the day! Initially arrived totally stressed out, with diarrhoea, but is so much better now and really ready for a new home!

I dewormed him the day after he came to us, and no worms were eliminated. His diarrhoea persisted, and I put him on loperadamide and antacid syrup daily. Today, he hasn’t had any runny poo at all, though he did vomit once in the morning. So am going to put him on antacid tomorrow for one more day just to make sure his tummy is nice and settled.

As for his stress, he has gotten much more used to being an indoor cat. Initially, when he arrived, I had to give him a cocktail of Pet Ease gel and xanax (anti-anxiety medication) because he meowed incessantly, trying to climb his way everywhere to purported freedom. He had hated being penned and being inside closed doors. We moved him to a bigger pen and he relaxed more. By the third day, his crazy loud meowing toned down, even more so because he has had visitors come by to cuddle him and give him attention – human company works wonders for him. Another wonderful thing is the blend of lavender and chamomile aromatherapy oil I have been diffusing into our foster living space for him daily, and today he no longer needed any anti-anxiety medication at all! Just the lavender and chamomile with lots of cuddles and attention and he is a-okay. Even though I had to move him to a smaller pen today because Helga arrived, he was completely fine. One of his visitors, my student, cuddled him and placed him in our kitten pen’s hammock and he enjoys lounging in it, and on the blankets and pillow I gave him as well. If you are keen to visit him just to cuddle and play with him, do contact us to say you want to see him for playtime!

He is currently on a diet of Addiction Salmon Bleu and Nutripe Beef. He drinks and eats well and is litter trained.