Today was Helga‘s follow-up appointment at the vet. She did her kidney function test to see if her urea and creatinine levels had improved and we had a consult with Dr Hsu after.

Turns out her creatinine and urea levels have gone down slightly, though still not within range of healthy. 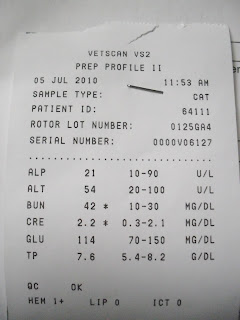 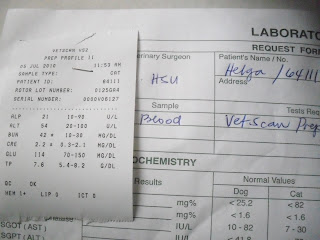 The next step is to continue her on her Royal Canin Renal diet. With the next follow-up visit in 2 months’ time.

She is also still on Fortekor, but we didn’t have to top up her supply of it today because we had received a donation of Fortekor tablets which will last us till her next visit.

Dr Hsu did not need to prescribe any Vitamin B supplements for Helga – he advises to continue on the Vitamin B tablets we bought at a dose of one tablet a day.

As for Helga’s weight – CRF causes muscle loss hence Helga will not be able to put on weight easily. Dr Hsu gave Helga a steroidal injection to help reduce her muscle loss so hopefully Helga will put on some weight from now on. It was worrisome at first to weigh her at the clinic and find out she didn’t gain weight at all. She is only 2.1kg. But at least now we know why and the steroids should help.

Dr Hsu also checked Helga’s ears and nails. Her ear infection has totally cleared up, and her nails – which were nearly ingrown, to the point where it bled when we trimmed her nails – are doing okay.

I also asked about Helga’s hind legs being quite weak, she doesn’t seem to be able to sit or walk properly sometimes. Dr Hsu suspects arthritis but he advises that we continue to treat the CRF first and foremost and KIV the arthritis suspicion. That and also because CRF also makes the cat weak and less dexterous.

Also asked about Helga’s digestion – CRF cats tend to have weak digestion – and mentioned that sometimes Helga still has runny stools, and that she sometimes pees and poos outside of the box. Dr Hsu doesn’t think Helga is having incontinence, so that is a relief. But if we do notice that her runny poo coincides with something different that she ate that would be a start to finding out the root of the problem. We’re thinking that we might have to get her some digestive supplements to help her along with this if it is not just due to differences in her menu of wet food.

The clinic didn’t charge us for today’s consultation, only for her steroidal injection and blood test. We also took the opportunity to top up some of our veterinary supplies that were running low. 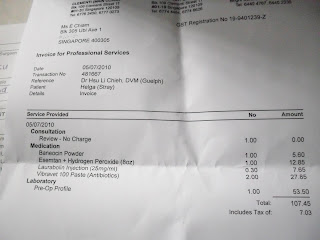 So Helga’s injection and blood test only cost S$61.15. The Royal Canin supplier is still out of stock of the Renal pouch diet so we couldn’t get our supply today, will be looking for alternative sources to get Helga’s RC Renal pouch food, and relying on other kinds of renal-suitable wet food to supplement her Renal kibbles.

As for her supplements, apart from Vitamin B, she is also on Stinging Nettle extract and am hoping to find Alfalfa extract to complement it too – both nettle and alfalfa is supposed to reduce creatinine levels. If her digestion and soft poo doesn’t improve, will get her Slippery Elm Bark extract (for digestion) if I can find it, or some other probiotics type of supplements to help her build a healthy digestive tract and eliminate the occasional soft-stools altogether.

And Helga was a really good girl at the vet today too! She was totally confident and at ease, wanting to walk around the clinic, unafraid of the doggie patients, and allowing strangers to pet and stroke her. She was cooperative during her blood test – though the veterinary assistants said her vein was very small and hard to locate – and during the consult too. At least she doesn’t see the vet as ‘the scary place’ and it will make it easier for us when we bring her for her regular visits down the road.