Meng and his wife, who feed, neuter and manage the resident strays in Geylang Lor 3, found two newborn kittens in a paper bag below their block. The kittens were borne of a mother cat who they have been having problems trapping for neutering, and when they tried to reintroduce the two kittens found back to the mother cat, she rejected them.

Panda and Panther are only about 2-4 days old, eyes unopened, umbilical cord still attached. They seem healthy, and have likely gone for a day without milk. It is possible that the mother cat abandoned them when she moved, or that someone took the kittens away from the mother deliberately, hence the paper bag: proof of human intervention.

Panther is a boy, and Panda, well we can’t sex him or her accurately yet since they are so young, but she is possibly a girl. They took to the bottle of KMR (mixed with one drop of vitamins) well, and have stopped meowing for milk. They are now sleeping peacefully – 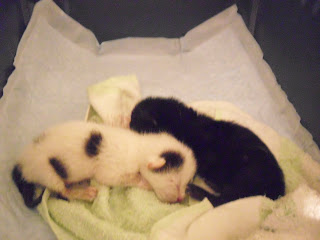 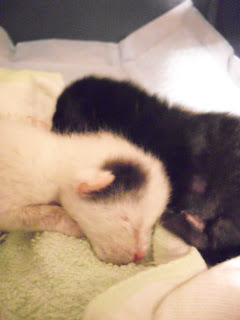 Meng and his wife thought about handrearing the newborn siblings themselves but found themselves stretched for time in between caring for their own cats and feeding the strays daily. They brought the kittens to us with a kind cash donation for Love Kuching as well. We applaud Meng and Rena for their efforts in caring for the strays in their area – they have successfully neutered almost the entire stray cat population in their area – there are only 2 female cats yet un-neutered in their area – and faithfully feed the cats every day. Yet they kept thanking us for taking on the fostering of these two kittens – when we should be thanking them for rescuing the kittens!

They will only be ready for adoption once they have been weaned off milk and learn how to eat on their own, and there is also litter-training they need to go through first, at about 3-4 weeks of age. We will report on Panda and Panther’s progress as they grow!