The P siblings, both boys, eyes opened last week, are now being partially weaned off the bottle. We have been placing a dish of KMR milk and canned food in their pen so they can learn to lap food on their own. So far Panther has learned to lap more successfully than Panda. Panda on the other hand, while slow to learn eating, is a really active cat who loves to scurry around the house when let out of the pen for walkabout, grooming and such. 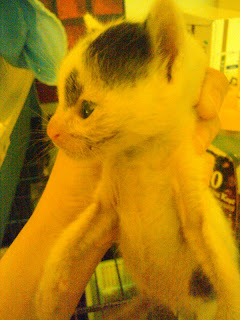 They get themselves really dirty when learning to eat, and they are still too young to be litter trained so they cover themselves with their pee and poo too! We have been using small animal shampoo (mild enough for kittens) to shower them at least once every two days.

When they get the bottle, they now can drink half a bottle each, and I add vitamins and probiotics for them in their milk too, so they can stay healthy. Handreared kittens might tend to be a bit weaker in immunity and such because they miss out on their mother’s milk, so the supplements are necessary to ensure they are healthy.

I handmade a reheatable pillow – using a towel with barley grains inside, when microwaved stay warm for long – to keep them warm. Right now most of their pillows are already soiled, they have one for now in a small basket which they cuddle up within to keep warm. 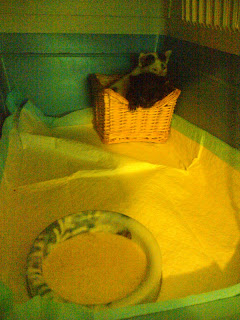 They are consuming roughly one can of KMR milk a week, so we have just enough till they are weaned off milk hopefully by next week when they are four weeks old. 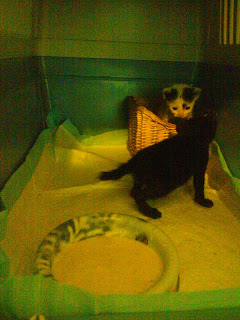 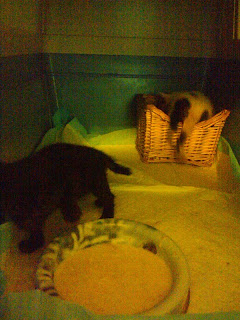 Once they learn how to eat, we will then proceed to litter training with a small litter pan to start. When that is finally successful, they be ready for adoption! Exciting couple of weeks ahead for the brothers!