Panda now 4 weeks old, developed an abscess this morning. He had abrasions on his hind leg joints to which we have been applying antiseptic. Unfortunately, probably because Panda has very thin leathery skin and he’s still not accustomed to the litter tray, unlike his brother Panther, one of the abrasions has developed into an abscess. We are rushing him to the vet now. We are tapping on our veterinary fund which is actually primarily for Helga, but because this is an emergency we will be using that first. Will report the vet bill later today.

Update after vet visit: Panda saw Dr Dawn Chong and here is her diagnosis. Panda’s abscess is not that serious – does not have a lot of pus, so surgically removing the fluid will probably not result in much. She says that Panda will unfortunately need antibiotics and anti-inflammatories for the abscess, and to continue using the antiseptic lotion and powder (peroxide and Baneocin) on his abrasions. She also recommended us to get Bactroban ointment for his abrasions and for the abscess, available OTC from human pharmacies.

She also said that Panda’s immune system is quite weak, so continue him on Lysine+vits and Acidophilus. We will also be getting colustrum (supplement from cows’ first milk after giving birth) for him to help boost his immunity.

The medicine she gave us – Danzen and Clavulox – was dissolved into glucose syrup for easy dispensation. She could not give Panda a jab because he is too small to calibrate the injection for him accurately, hence we will be syringing him twice a day after milk feedings.

Panda is still unable to eat on his own. Panther on the other hand is a greedy hound of a kitten! He is now staying with Meowy and Phoenix, having a ball playing with Meowy. The first thing he did when he entered their pen was to eat! Meowy and Panther are now sleeping together on Meowy’s blanket. It is also easier for us to monitor Panda on his own, and he is slowly getting used to being without his brother – this also means there is half the amount of pee and poo in their pen that will infect his wounds, which is probably partially what caused the abscess apart from his overly thin leather.

Panda is due for a review in a week if his abscess does not subside and heal, because Dr Chong is rather worried for the little one. She also shared our sentiment that if Panda was still a stray, he probably won’t have survived till now because he is a little weak.

Panda also has soft stools, which Dr Chong hopes the antibiotics will help clear up.

Here is today’s vet bill for Panda. We had to tap on our veterinary fund. If you would like to help us cover today’s vet bill, do donate to our Love Kuching account and let us know that your intention is to cover Panda’s veterinary bill. 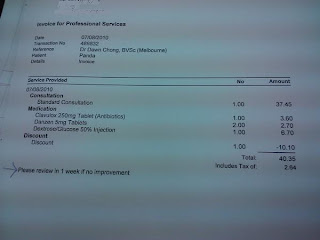 We still have high hopes for Panda, and left the litter tray in the pen (actually a large carrier) for him in case he finally realises he can pee and poo there, just like his brother Panther did when we introduced the litter tray to them. But we will keep him on milk feedings, and not be placing food in there for now because he gets himself covered in it, (unlike Panther who is rather clean), which will worsen his wound.

Little Panda attracted quite a lot of attention at the vet! Lots of people said he was really cute, and he is. He got sniffed at by some doggies, stroked by some humans and children. We hope he gets well soon! It was an anxious morning for us but now we feel more at ease knowing the abscess isn’t as serious.