Last night Damy was called to trap and sterilise the cats at Sims Drive where Dusky was found; the neutering is being sponsored by Liyin who rescued Dusky. A total of 6 cats were trapped and will be released back to their territory when they return from sterilisation.

When they were trapping one female cat, her son followed behind and went along with his mommy into the trap.

So Moby aka Mommy’s Boy is now with us at our foster home. 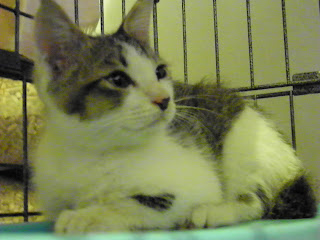 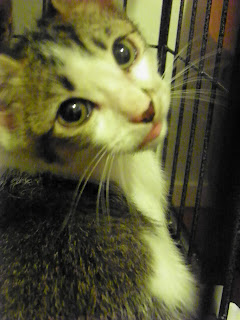 He is very tame, enjoys cuddles, and was obedient enough to let us shower and deflea him. He has just been dewormed, and we will be getting Revolution for all of the foster cats since he came to us with fleas. He seems to know Dusky, so we reckon they are cousins – Moby is slightly bigger, about 10-12 weeks old. He is a chubby boy and will definitely be a wonderful cat to have as a pet once we socialise him more and get him used to being indoors.