This evening we went to rescue 4 male kittens aged 8-10 weeks old from a pest control shop along Ubi Ave 2, that kept the young kittens in a cage at the back of the shop as they did not want to send them to SPCA or AVA to be put to sleep at a young age. The pest control shop kept the 4 of them penned in a small cage at their storeroom where the pesticides were kept and fed them. They had brought one of them to the vet but all 4 of them are still showing signs of cat flu’.

They were discovered when Ubi Techpark cat-zone patron went to conduct a TNRM there last month. At the time we had no space to pen the litter of kittens discovered, and when our kitten pen was free we immediately met up with Liana to pick up the kittens.

All 4 kittens are stricken with cat flu’ and their younger pen mates from a different mother have died. The 4 remaining ones we brought to our foster home for rehabilitation – we have showered them and checked them for fleas (none), administered Vibravet antibiotics and applied Ilium Opticin to their teary eyes. We then fed them Nutripe (tuna formula to entice them to eat) and Solid Gold Indigo Moon kibbles, fortified with Lysinium Max (lysine + vitamin B) and colostrum for immunity.

The 4 of them got used to their new, bigger pen at our house easily, and started playing with toys and climbing the various levels of the pen, and ate immediately when their food was served.

The kittens are all male, 2 of them are black-silver tabby with both classic tabby and mackeral/spotted tabby markings. 1 is a black and white, and the other a tabby and white.

We had a visit from Michael and Pauline this evening, and while they initially wanted to adopt Dusky, they eventually bonded with one of the silver-black tabbies, and have already named him Asahi. We shared the medication information that Asahi was on and they will be bringing Asahi to the vet (The Animal Clinic @ Sunset Way) tomorrow so that Asahi can continue to be rehabilitated from the flu’ at their home. 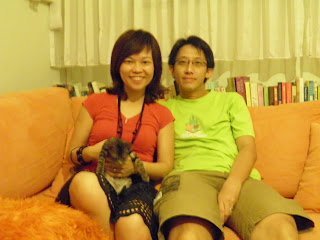 We are thankful to Michael and Pauline for having such compassion in willing to take care of a sick kitten like Asahi.

They will continue be on antibiotics and eye medication, and when recovered from their flu’ they will be dewormed. So far they seem inclined to use the litter box and are not very fussy eaters. We will update our blog with their progress.