This is Lassie, a 3 week old girl who was found by Catherine‘s mother and neighbour residing in Lorong Ah Soo. She was found alone, with no mother in sight, and still unable to eat solid food on her own. Before she came to us, Catherine told us she was 12cm in size, so we could guess her age and gauge the space needed to foster Lassie – our large carrier will fit nicely as a makeshift pen for Lassie since the kitten pen is a quarantine area for the sickies Sapporo, Orion and Kirin.

Catherine brought Lassie to us this evening straight from her mother’s place. She was given a quick shower and flea-check and found to be healthy.

Lassie is likely an abandoned kitten from an unwanted pregnancy by an un-neutered female house cat – it is dumping season after all, where households spring-clean their unwanted goods. Lassie is healthy, plump and obviously has been on mother’s milk before she was placed at the void deck.

We fed Lassie some milk with a bottle, fortified with colostrum, two drops of Lysinium max and some probiotics, important because now she no longer has her mother’s milk immunity and being this age, is very likely to fall ill suddenly. She suckled hungrily. But while she is interested in the canned food I placed in a dish for her, she is not ready to learn how to eat yet. Nonetheless we will keep introducing food for her as at 3-weeks-old she can already be partially weaned. We also placed a litter tray for her so we can slowly ease her into litter-training.

Here are some pics of Lassie after being bottle-fed – 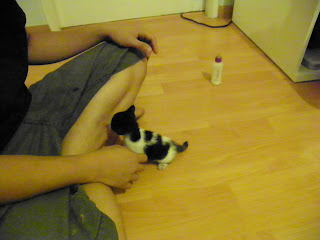 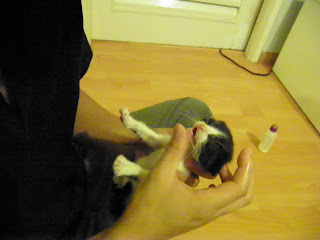 Lassie will have to go through weaning and litter training before she can be ready to be re-homed. Hopefully by then the kitten pen tenants will have fully recovered from their flu’ and she can hang out with them, and learn kitten ways from them.