Last night Shu and Eddie brought us 5 kittens they found in a multi-storey carpark at Choa Chu Kang. They were found in a cardboard box with blankets. Nearby, a foreign worker hovered. Shu asked the worker if he knew where the mother cat was. Apparently the kittens were removed from the mother because people have been complaining about the litter of kittens. So they were placed in a stairwell of the multi-storey carpark.

If Shu and Eddie didn’t pick them up, they would have died of starvation eventually. Unfortunately they are inexperienced with hand-rearing newborn kittens and so they brought the kittens to us.

The 5 orphans are now with us. 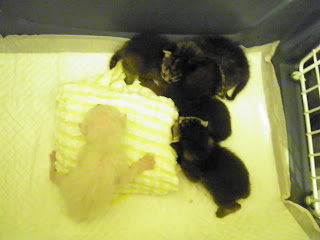 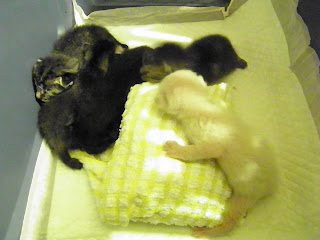 They are about a week old, healthy, needing milk about every 4 hours. Their eyes have yet to open but will soon. Sex indeterminate for now, so we will have to name them unisex names – the lavender one is called Whitey. There is also a black one, 2 ticked tabbies, and 1 spotted/mackeral tabby. Sleepless nights ahead!