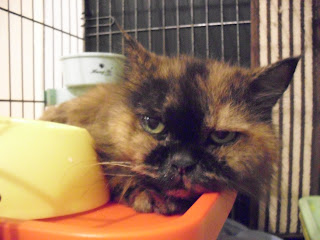 It started with respiratory distress. I found her having difficulty breathing in the afternoon. But when I listened to her lungs, her airways were clear of fluid and there was no wheezing. Yet her heart rate and breathing rate escalated beyond the normal range.

Vets being closed for the public holiday, I called the doctor’s hotline and spoke to Dr Hsu. He said that she was probably having difficulty breathing because she was trying to expel the excess urea and creatinine in her system. We placed Helga in the recovery position with her head elevated and covered her with a blanket (2 of the things to do when a cat is having difficulty breathing). One of Helga’s major financial supporters, Catherine, contacted Mount Pleasant’s after hours clinic and we brought her there. When we left home Helga was already losing body temperature and I transported her carrier with a hot water bottle to the Mount Pleasant clinic.

There they placed her on oxygen. However, the prognosis was no good. Helga was showing signs of leaving us very soon. Low body temperature, continued difficulty breathing. We reported Helga’s urea and creatinine levels to the vet. At best if we opted to put her on IV and oxygen therapy and hospitalise her she would live for a few more hours. But it meant that Helga would die alone in the clinic. Also, it wasn’t an economical route to take as Catherine has already sponsored far too much of Helga’s care, where the financial resources can be triaged to better rescue efforts. Helga was already in suffering. Her kidneys had officially failed. So, we took the vet’s advice and let her go via euthanasia.

It wasn’t as hard to see her die as it was with the other cats that have died in our custody before her. Simply because it was painless and Helga knew it was time for her to go. She left with much dignity and in no pain. Witnessing a cat’s struggle to live and eventually die in your arms in distress is a far more traumatic experience for both us and the cats. If we had been able to euthanise every cat that was on the brink of death to save them the final hours and minutes of gasping for air or heart failure etc. we would have.

[Video of Helga’s passing via euthanasia was recorded but Youtube has yet to upload it successfully. Will update this blog post with the video when it is up.]

Despite the process being painless for both us and her, we feel her absence immensely. Having gone through abandonment, braving muscle loss, sub-cutaneous injections and medicating with her strongest front, being a purring manja cuddly bundle of fur, being at ease with all the other cats and foster kittens in the house, loving visitors – all that of Helga is no longer with us.

She leaves behind renal dietary food, medication, and sub-cutaneous injection sets. We will be trying to sell these items to folks having a CRF cat to try and reclaim some of the donated funds that were used to purchase these items for Helga.

Helga’s remains will be sent for cremation tomorrow.