A stray cat caregiver, Ena, before her daily feeding rounds on Sunday night, found a shoe box with 3 kittens in a void deck. She was distraught because all of her strays are neutered and she did not know who the mother cat was, in a bid to try and reunite the kittens with their mother to prevent orphanhood. Alas, it is likely that the shoebox kittens were dumped from a house with an unneutered female cat. This was close to midnight and Ena called us to see if we could foster.

(We had the space for the newborn orphans because Billie just passed away the same day from hookworms; she did not survive the deworming process despite topping her blood sugar level with glucose. Hookworms are blood-sucking intestinal parasites.)

Ally, Emmy and Nelly are about 5 days old, no signs of illness as of yet, and when discovered were still warm, clean and full. Very newly abandoned and Ena’s vigilance in rescuing them was swift enough. The kittens are now in our foster home and so far still doing okay on 2-4 hourly bottle feeding rounds. They are on KMR milk and colostrum supplements. 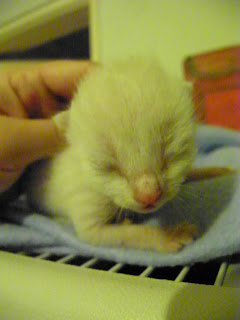 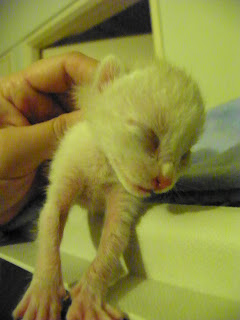 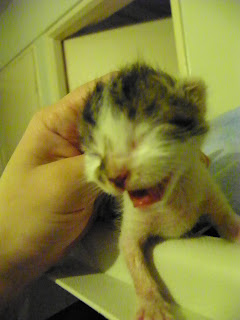 Ally is most likely a girl, Emmy a boy, whereas Nelly is quite difficult to sex accurately. We will be trying our best to bring these kittens to maturity. Meanwhile, it will be a close watch on them with round the clock feedings.