Helga is an abandoned Persian cat diagnosed with Chronic Renal Failure. She requires a vet visit every two months and will be fostered by us until she passes on.

She had her kidney function test done (pre-op test) and it turns out it is still on the decline. 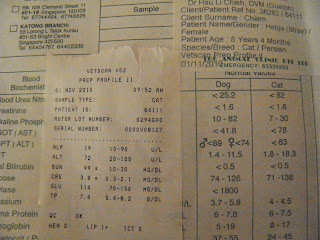 Her urea levels went to 99 (up from 77) and creatinine 3.8 (up from 2.9). Unfortunately, CRF can either be a steady decline or it may spike, so it is hard to estimate how long Helga has to live left. An optimistic estimate is a year if she doesn’t spike.

Helga is also losing more and more muscle mass due to the CRF, so she was given another steroidal injection today. Her weak hind legs are caused by this muscle loss, causing her to drag her hind legs when she walks.

I also asked Dr Hsu about the growth on Helga’s tail. Upon inspection, it is a cosmetic growth and she will not require or actually even survive surgery to remove it. It is not an abscess and can’t be lanced, but is a solid growth around which it bleeds and needs daily cleaning with peroxide and Baneocin antiseptic powder daily. It seemed to have grown in size merely because of the scabbing. Helga now has a permanently bald spot on her tail with a horribly bleeding growth.

Her sub-cutaneous injections are now reduced to only 50ml per load, as she has lost weight – 1.8kg now. But because the amount is so small (tried higher load of 75ml, still fluid overload) it will have to be done daily from now on instead of a few times a week.Good thing she is now so used to it.

Topped up her supply of Royal Canin Renal pouch food for her today as well as her Azodyl kidney-specific probiotics. Our Veterinary Fund is now in deficit. If you would like to help share in our veterinary expenses, please see how to donate here. 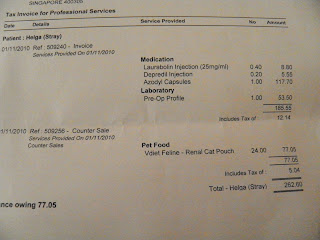 The good thing is that Helga is not in any pain. Her now-daily sub-cutaneous injections will help her eat more so we are looking forward to more emptied bowls of hers. She is still on a herbal remedy as well.