One of our volunteers and supporters, Edmond, found 4 kittens last night near his house. They were likely abandoned in a box as one of them was sitting in it when Edmond found them. They were hungry and very sick.

Today Edmond contacted us if we could foster the kittens. Sweetie is now completely recovered and gets along with the rest of the foster kittens Orion, Dusky and Pony. Edmond told us the kittens were about 6 weeks old, so we got Sweetie to free-roam the house and used the pen for the 4 kittens Edmond rescued. 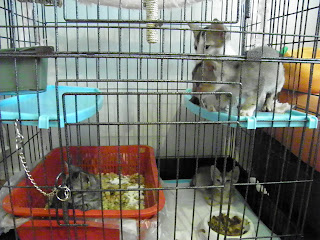 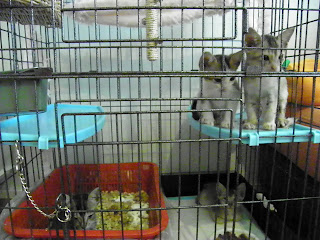 Of the 4 kittens, Ivory and Sepia (ticked tabby kittens) are having bad diarrhoea and teary eyes. Abyss, a white and ticked tabby, seems to be fine but also has a bit of teary eyes. Ebony, a black and silver ticked tabby, is having very bad conjunctivitis. We asked our vet which broad-spectrum antibiotic to use which could work for both diarrhoea and flu’ – the solution was Clavulox. We also gave them loperamide, and dewormed them, especially since we saw bloody poo and vomit. Their eyes also need medication and cleaning and we are applying them with Terramycin. They have been fed with probiotics, colostrum and Lysinium Max supplements this afternoon too. This here is Ivory – 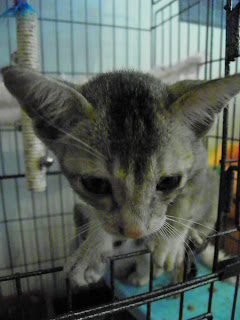 who has markings very similar to the Singapura breed cat – agouti ticked tabby with mackeral stripes on the inside of the forelegs instead of outside.

Their behinds are constantly soiled from the diarrhoea and hard to determine who is male or female but we will be able to sex them accurately soon. In the meantime we hope for their recovery as we rehabilitate them.