Yesterday, we received a call from Anwar, Faith and Sarah who wanted to rescue a kitten from their neighbourhood in Bedok.

Faith and Sarah have a neighbour whose kid likes to bring home stray kittens from elsewhere, separating them from their mothers and their familiar territory, and placing the kittens outside their house, a first floor HDB flat. While the intention seems genuine, their care for these kittens is rather negligent; they feed the young kittens table scraps consisting of things like curry and cake. Sweetie was one such victim, brought to this neighbour’s house when she was about 6 weeks old. Eventually, being fed things unsuitable for a kitten, she fell ill with an upset stomach. Faith, Sarah and Anwar rescued her and brought her to the vet.

She likely has a bacterial infection from eating the wrong things, and had developed the demeanour of a sick cat – grouchy, unwilling to be touched, unresponsive. But she is already on the mend, and Dr Loh has prescribed her Baytril antibiotics and dewormed her.

Sweetie is now staying in our foster home. Not only did Sweetie’s three rescuers sponsor her vet visit they have also contributed financially to her boarding expenses with us – thank you. We also thank Faith, Sarah and Anwar for not only being vigilant on the ground for stray kittens in need, but also making the effort to bring her to the vet and find her a fosterer. 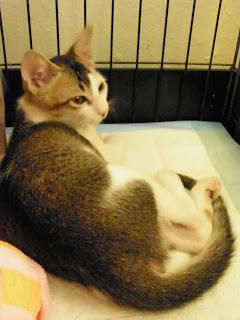 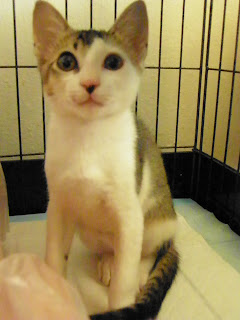 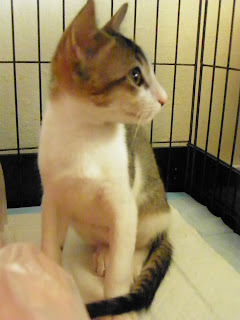 Sweetie is 8 weeks old, female, white and tabby bicoloured with a long tail and round eyes. She is currently still on antibiotics and she has already improved in her appetite and demeanour. She will be available for adoption once she has recovered, so do watch our Adoption Alert on the right for her picture when she is ready to go to a new home!