Orphan kittens always have such a hard time battling illnesses. Both Ally and Emmy had developed symptoms of cat flu’ and Ally’s other sibling, Emmy, passed away on Saturday 4th December, from a severe upper respiratory tract infection, causing bloody mucus. Medicine – Danzen, anti-inflammatory – was administered upon our vet’s advice but Emmy still didn’t make it.

Meanwhile, Ally continues on Vibravet antibiotics. She was also given Chlorpheniramine (anti-histamine) and Bromhexine (anti-mucolytic) as well as put on a herbal remedy consisting of licorice, echinecea, mullein and elderberry extracts. We helped her clear her nose by sucking the mucus out. Her symptoms improved greatly. Her mucus stopped flowing, so we took her off the anti-mucolytic and antihistamine, continuing on the antibiotics and herbal remedy.

However, late last night, her nose started running again, so she is back on Bromhexine. Because of her runny nose, she hasn’t been drinking much since 12 midnight, and finds it hard to breathe. We have to now feed her small frequent doses of milk instead of 4 hourly, since she drinks very little each time. Checked her lungs, they sound clear, the fluids are around her nose and throat areas, so her breathing difficulty is likely because of her nose being blocked. So we are back on sucking out her mucus from her nose, and diffusing eucalyptus with clary sage essential oils in the foster lounge to help her breathe better. She started to pale a little, so we  supplemented her milk with liquid CoQ10 which has helped, as well as some glucose. She is still alert and active, and is being kept warm.

Ally is actually a smoke (shaded) silver coloured cat. She has huge eyes and tabby markings on her hind legs. Unfortunately she doesn’t look too good in these pictures, taken today when her symptoms worsened – 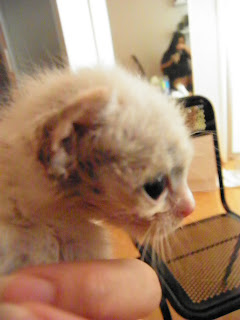 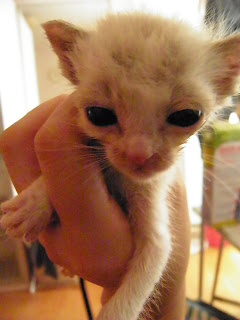 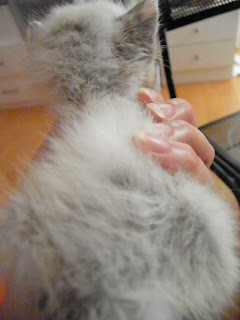 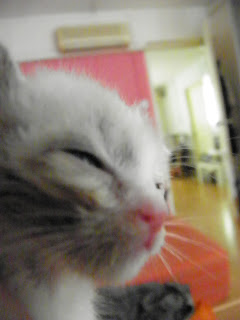 Now that Ally’s flu’ has turned critical again we are naturally very worried for her. We will keep up the intensive care for her and hope her condition turns around.