Pedro is a pure-breed classic tabby Bengal (F3 or F4) that was abandoned by his owner, a French expatriate from Bukit Panjang who left him behind when he left Singapore. His neighbour, Sonny and family, fostered him but at the time, Pedro had severe socialisation problems, stress and had skin problems – fur loss, cat acne – so Sonny brought him over to our foster home so we could rehabilitate Pedro and find him a forever home. 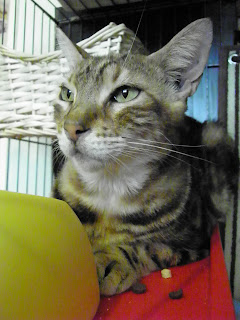 So we set about rehabilitating Pedro.

First, he suffered bald patches around his scruff area and on his tail. We treated his bald patches with peroxide and Baneocin antiseptics, and subsequently povidone iodine. We supplemented his food with fish oil (omega 3) to restore healthy skin and coat.

For his cat acne, we started him on Bactroban, an antibiotic topical cream, then went on to use Combiderm, which was both antibiotic and steroidal, because his cat acne – prevalent in ears and on chin – were itchy. We also cleaned his ears with pyrethins ear mite solution regularly to prevent wax build-up, and put him on Revolution, to rule out the possibility of ear mites or ticks.

To combat this myriad of skin problems, we bought him Pyoben medicated shampoo – benzoyl peroxide shampoo – good for skin problems – and showered him regularly with it to aid in his healing.

His cat acne has receded a lot. So far only a few remain in his ears that are quite persistent. Cat acne is usually as a result of stress, so we have put him on antioxidant supplements (Vitamins A, C and E) as a counter measure. His new owner will be given the tub of Combiderm that he has been using to continue the treatment of his cat acne in his ears. Our vet also suggests laser surgery of some kind to burn off the acne which can be a quicker solution, albeit costlier.

For Pedro’s socialisation, we trained him like we would a dog, as Pedro, like most Bengals, has a very canine personality. When he first came, he started growling and picking fights at every cat in the house. We gave him his own pen to feel safe in, and allowed him to come out for play and interaction with humans under supervision. Whenever he started meow-growling or adopting a fighting stance with any cat, we chided him with a loud NO and placed him back in the pen as his punishment. As time passed, he gradually reduced his bullying. Today, he no longer bullies the cats as much, and has become much more docile.

He also at first did not allow us to carry him and would attack and bite us. Now, he nips like how a kitten does out of love. When he nips too hard, we also chide him with a loud no and return him back to his pen. We allow him to come to us instead of us to him, and he has become very affectionate, allowing us to hug him more and more often. He absolutely enjoys rubbing up against people and being stroked. 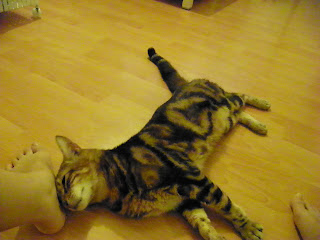 Pedro is extremely social with humans of all ages, from child to senior, and craves for human attention a lot. He enjoys visitors very much. He likes to talk as well, and responds to toys – though he prefers a variety of toys as he gets bored easily. He responds to cat nip toys and can find the nip whereever it is hidden!

Pedro needs a home with an experienced cat owner; families would be great for him as he loves human attention and is good with children, and he needs lots of play time and affection. He would be best suited for a single-cat household as he does not want nor need feline company and does not socialise very well with cats.

However, if you would like to adopt Pedro and already have a cat, you can still be eligible to adopt him if you are able to spend the time and effort in socialising him to your cat, which would take a while. Until now, Pedro still does not want to play with our foster kittens, and is terrified of our own 4 cats; so do reconsider if you already own a cat.

Pedro is now 8 months of age, is sterilised (no papers nor tipped ear), and is on Solid Gold Indigo Moon and Addiction Brushtail foods. He is litter trained (unlike some Bengals which cannot be litter trained) and is keen on drinking water, so he can be fed a dry or dry with wet diet, as we do.

If you are keen on adopting Pedro, please contact us with answers to our Adopters’ Questionnaire (Elaine – 90880675 – elaine@lovekuchingproject.org / Andy – 81277072 – andy@lovekuchingproject.org ). Do note that Pedro being a pedigree and at risk of being adopted and then resold by profiteers, his adoption fee will be at $60 (pedigree kitten rate). Once your family / household has passed the screening and is agreeable to our Adoption Agreement we can set up a time for you to visit us at our foster home.