We received a call late last night about a stray cat that gave birth in the porch of a house in Chervois Road.

Initially, the family who lived in that house thought that the cat had wandered in from the streets by mistake, and they chased her away. Eventually they discovered a litter of kittens in a corner of their porch and garden, which was why the stray cat deliberately entered the premises of the house – because she had given birth inside.

Upon discussion with the family, we found out that Chervois Road (near Raffles Town Club) has one resident stray cat – the mother of this litter of kittens found in the house’s porch; with one other ‘house’ cat with outdoor access roaming the street as well, likely an un-neutered male. There is no one apparently caring for or feeding the stray cats in this area, and the cats have been basically scrounging around for scraps – no feeder has been sighted feeding before.

Because there is no feeder, and thus no one to touch base with to plan the logistics of possibly moving the litter of kittens and their mother away from the house – by feeding them elsewhere – the next best option was to re-home the kittens. Usually, we try to leave street kittens alone in the care of their feeder, but in this case, there is no feeder. The next best option was to re-home the kittens, but family is intolerant of cats, hence they wanted the kittens out of their house for good without the burden of fostering them in the meantime. So, a shelter or alternate foster home was the next best alternative, and we asked the family to bring the kittens over to our foster home. We also advised that they call SPCA to investigate the mother cat – possibly to neuter and release her, since she is the only stray cat in the area that has been spotted. 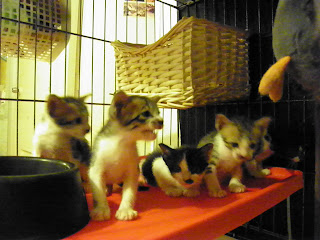 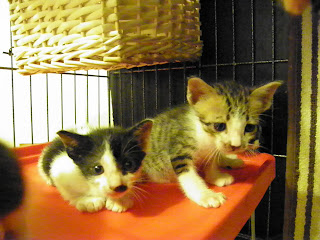 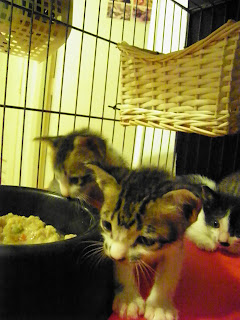 Chevy and Cate are white with black, and the other three are tabby with white. Chevy and Cruiser are boys.

They have been given a shower, no fleas found, and will be dewormed today. They haven’t taken to food yet, and are quite stressed and scared in the meantime. Will post them for adoption with more pictures and their description when they have settled down and we have dewormed them and observed them to have no illness.