Yesterday we got a call from one of our previous adopters, Sam, who adopted Zoukie (now Leo) and Sam (now Lenny).

He was at Dempsey Road and he found out that a stray cat there had given birth outside one of the shops. 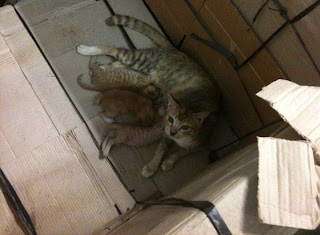 Because the shops didn’t want her and her kittens there, they placed the kittens in a box and left it in a field nearby where there were red ants and such, and separated from their mother. Needless to say, the mother cat not only won’t return to nurse her litter after this trauma, even if she could find them.

So the three kittens became needlessly orphaned, and Sam brought the kittens over to ours. They are now 3 weeks old, still needing the bottle and unable to eat on own, are a bit flu’ey, and have intestinal worms and resulting poor appetite with distended bellies.

All three kittens are red tabbies. Two of the kittens are male, and one is female. Dempsey has a bobtail, Wine and Curry have long tails. They are now in a small pen quarantined from the other kittens. 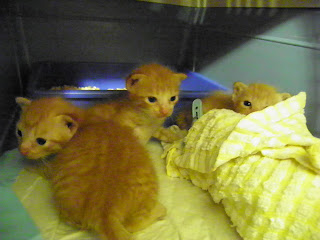 If their appetites don’t improve soon will deworm them immediately, something we usually do at 4 weeks old instead of 3 weeks old, though it is veterinary-approved to deworm kittens at 3 weeks old too.

They drink very little each time they are given the bottle every 4 hours or so. We have supplemented their milk with CoQ10, Lysinium Max, probiotics and colostrum, so that whatever little milk they are drinking now, they at least get a system boost to help them tide over the loss of their mom.

We hope the kittens make it through!