Our Sealy, the first rescued foster kitten ever we fell in love with and decided to adopt is turning 5 months old in February! 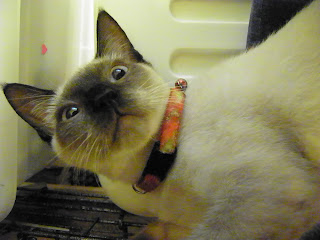 The reason why we love him so is because he is a bit silly, his nickname is Gong-gong which means dumb. He is named Sealy also because of his seal point – his mother is a Burmese cat and his dad a British Shorthair (both his parents were sterilised in our TNRM project at Upper Boon Keng). He’s very similar in character thus to our Slinky who is also a cross British Shorthair.

He had a rough patch after his first vaccination. Because he came from Upper Boon Keng, which is flu’ ridden, he harboured the flu’ virus which came into full force after his vaccination. His flu’ persisted for a long time, and he had to go on 2 rounds of antibiotics to get well.

Then he started having diarrhoea that resisted medication. When he went for his second checkup, Dr Hsu told us that Sealy’s diarrhoea is probably the chronic kind that will go away on its own after a few months, as long as he is eating fine and active, it will be okay for him. So he is just on probiotics for now.

He is now the new official small-kitten IC in our house, helping to socialise and play with the foster kittens we shelter in our home. Scooter has retired from that post!

He is like our Queen Slinky in so many ways. He hates dirty litter boxes to the core – and both of them retaliate the very idea of a used litterbox very strongly! He had a behavioural problem of pooing on our bed many times, but he no longer does so after much training. He is also extremely greedy. And likes to be alone. Also not very keen on jumping high places. Very Slinky!

He will be going for his sterilisation operation very soon! We can’t wait for him to grow up!