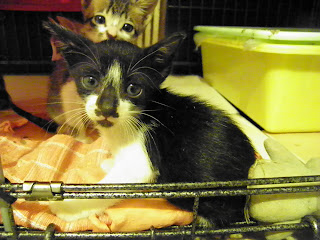 All the 5 kittens when they first arrived were stressed out and unable to eat on their own. After some bottle- and syringe-feeding, they finally started to eat! They have also been dewormed; some of them are still having post-deworming diarrhoea.

Here are some pictures of them taken tonight

Cruiser is one of the more vocal of the lot, often meowing for attention or food. They aren’t yet used to being cuddled by humans, so they will need some socialisation. Ally has joined them, and they followed her in using the litter box, exploring the third level of the pen, and in learning how to eat and drink.

Will post more pictures of them soon, when they have fully recovered from their runny poo and are more socialised, then they be ready for new homes!