Dempsey and his sisters Wine and Curry just got their first shower today! Here they are all blow-dried and being orange – 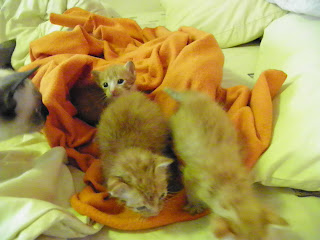 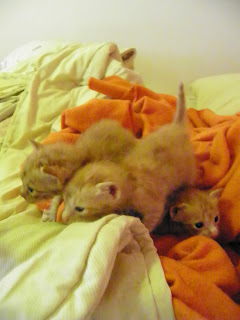 When they first came to our foster home, they had very poor appetite. They didn’t take to the bottle well, and drank very little each feeding. They hardly mewed or moved. We syringe-fed them drop by drop, coupled their milk replacement formula with supplements like Lysinium Max which would boost their appetites to help them along.

We worried that it might be their intestinal worms that were causing their poor appetite, so we dewormed them early this week. When their appetites were poor they also started looking pale, so we added glucose and CoQ10 to their milk.

They were also constipated so we added probiotics to their milk. Sounds like a lot of supplements! But we are trying our best to help them along without the wonders of mother’s milk, so a minuscule dose of each of these supplements may make a huge difference in their survival.

Then they started showing flu’ symptoms – not a lot of sniffling but teary eyes. We initially tried to see if they could recover on their immune systems boosted with colostrum, Vitamin C and Lysinium Max, but it didn’t help the flu’ much. We applied Ilium Opticin to their eyes and put them on a herbal flu’ remedy of elderberry, licorice, echinecea and mullein. They improved much after that, and their appetites are now great! Greedy as kittens should be.

So we introduced them to solid food again today – they rejected it when they first came, but now their teeth have begun to bud, and they are getting hungrier, so it was timely. They took to their Addiction Brushtail immediately! Of course, weaning is always a messy process! They got themselves totally drenched with food (mixed with milk) and so they had their shower immediately after their swim-in-food.

They are very vocal kittens now that they are much healthier! Wine is the most outgoing, and the greediest. She showed improvement in appetite first amongst them. She also has the darkest red colouring amongst the three of them. Dempsey, the boy with a short tail, has a white chin (inverted mask) and white ankle socks on his forepaws! He is next in line for the greediness award. Curry, the cream version of them (really the colour of curry! Like, northern Thai curry?) is the weakest and smallest of them all. She has the smallest appetite, but is also the most obedient – she mewed the least during their shower. We hope she survives as nature’s way usually takes out the weakest of the litter first – survival of the fittest and all that.

As one rescuer said to us before, with kittens that are orphaned without mother’s milk, it is always a touch and go scenario. We know that kittens this age die easily, but we won’t give up, and we hope all three of them won’t either. Keep them in your thoughts!