On the eve of the new year we re-homed two kittens, Gin and Mae!

Mae was adopted by a family whose parents are teaching in NUS and live in Sunset Way. 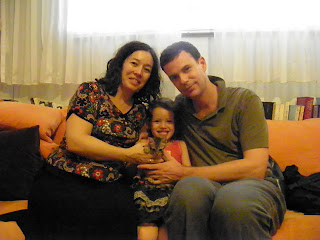 Patrick and Jacqueline’s daughter, who is very gentle when handling kittens – a plus point for healthy kitten-child interaction! – has renamed Mae, Tutu! Tutu was very enamoured of her new dad and sister especially, snuggling into her daddy’s neck and blinking at her human sister a lot. Both parents have a lot of experience in pets, and have adopted cats in the various countries they have worked in. Their last cat died of a dog bite in Hong Kong and we were truly sorry to hear that. The family will be in Singapore for the next few years and have already planned how they will bring Tutu along when they return to Europe – via Portugal, which has the shortest quarantine period for minimal stress on the cat.

The next adoption was of Gin! Gin is now an Ang Mo Kio cat, has a big house to run in – Gin’s favourite activity is spurts of galloping around the house – and has an older cross-Siamese brother who is 1 year old, also adopted. He also now has two human older brothers who love him a lot. 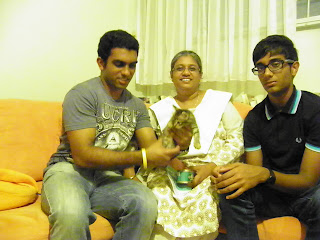 Gin has been given his own room so he could slowly get used to his new feline older brother. He will be brought for his booster shot and checkup next week at their vet in Ang Mo Kio, The Animal Doctors.

We are so happy for both families and that Chinese New Year is a season of cat adoption!