In December when we went to trap and neuter the 9 cats at Blk 47 Bendemeer Road, we passed by a nearby substation in the carpark where there was a colony of un-neutered strays.

With concern, we did some investigation and found out that the feeder who feeds this colony – who is not in contact with the Blk 47 feeder Juliana – is the same lady who used to sterilise the cats in this area but stopped for lack of funds and resources, which contributed to the cats reproducing once again and population growth. Our Bendemeer contact, Lilian tried to ask this feeder to call us so we could discuss neutering this colony of cats. But this feeder’s response was lacklustre. We went there this Friday night to visit the cats again, and met hungry cats who dug into the Fussie Cat canned food we brought. There were some dry food platters outside the substation where the cats hang out, and a shallow dish of water, but the cats still seemed hungry. We hear from Lilian that it is not the feeder herself who feeds the cats her but her maid.

We much prefer working with a cat feeder who knows the cats inside out, and is concerned about getting them sterilised, which the impression we got of the feeder of this colony proves to be otherwise. So we decided to bypass trying again to touch base with the feeder or her maid, and work on getting to know these cats ourselves so we could get them neutered and returned to their territory.

We met these cats at about 10pm and when we fed them, they responded, exiting out of the substation, coming to us, eating our food. 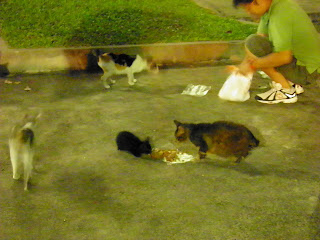 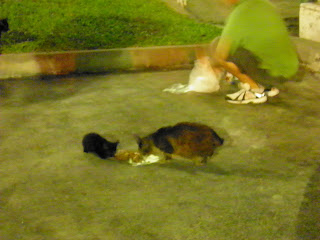 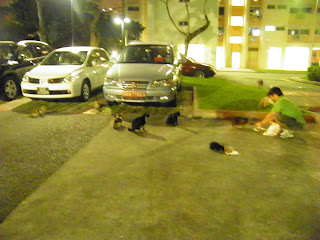 We spotted about 8 to 10 adult cats, some on heat and some pregnant. There were also 2 kittens sighted, about 2-3 months of age – a black little one and a white one with an orange saddle pattern. We are not sure if within the substation there are any more young kittens. If we do end up trapping a nursing mother cat for neutering, we will rescue and foster the kittens. So far no baby kittens were sighted.

We have planned to trap this colony for neutering next week, 16 Feb Wednesday around 10pm. We decided to stick to the time we first fed them at 10pm last night as they were hungry enough to respond. Any earlier, we aren’t sure of a successful feeding and thus of luring using food during trapping. Also, we will be making nightly trips at around the same time till Wednesday arrives, so that we can get to know the cats better. By the end of next week, we want to see tipped ear cats only at this substation!