We trapped a total of 9 cats on Friday night for neutering at Eunos Crescent Blk 25! It was an encouraging start to solving the critical stray cat overpopulation problem at Eunos Crescent – and your donated funds made it possible!

Here are some pics of the 9 cats before they were successfully trapped.

During the trapping, one of the sterilised males nicknamed Teddybear kept trying to get involved in the trapping – he was so greedy he wanted to eat food from the placed traps even after we fed him!

After the 9 cats were trapped we took their mugshots as per our usual practice, for accounting and records purposes –

We also ran into some kittens that between 2 to 3 months of age who seem healthy – unfortunate that we can’t house them now to rehome them – 1 tortoiseshell, 1 ginger, and 1 silver tabby.

6 out of 9 of these cats will be relocated to less cat-populated blocks nearby to ease up the overpopulation at this block, which when numbered with the already neutered ones add to about 20 cats. Their return from post-op boarding will be on Sunday and Lynn the caregiver will oversee the relocation.

We didn’t get to meet any of the block’s complainants invited to join us that night, but many witnessed from their homes (trapping was done in view of windows) the trapping that was being carried out. We did manage to touch base with the block’s feeder, as well as the feeder behind the block near the industrial site, and the feeder from the next block, Blk 24.

6 cats counted remaining un-neutered at this block based on our count, and a tally from the Blk 25 feeder who knows the cats individually and who is not yet neutered. Here is a picture of one of the cats that disappeared the minute the traps were placed – 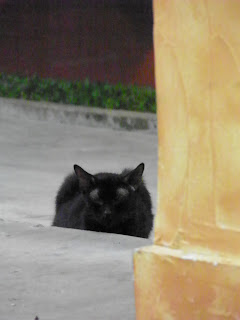 We also saw a mating couple after the trapping, and we know we missed out on another black and white cat. We also missed out on the cats behind the substation because they went to the industrial site to get food placed by the industrial feeder, avoiding the food-filled traps.

We will be conducting the second round of trapping to neuter these remaining 6 cats on Thursday, 10pm, 24 March. Also, if there is space and time, we will trap some of the un-neutered cats at Blk 24. We communicated to both the blocks’ feeders to not feed on Thursday, as well as to pass the message to the industrial site feeder, as the cats behind the rubbish dump / substation do roam to the industrial site to eat.

Blk 24’s cats do share a common space with Blk 25 – the carpark, and the cycling lane with grass area connecting the two blocks (facing industrial site). We did a short recce at Blk 24 to count how many un-neutered cats were there. Our cat count yielded 4 cats. Our camera ran out of battery just before then, so here are some phone-camera pics taken of the 4 cats from Blk 24 and in between Blks 24 and 25:

Will report the expenses from this round of TNRM once the amount has been tallied by Damy. We may need more than the projected $1,675 for Eunos Crescent because we underestimated the cat-count and it there are likely more females than 50% of the population. Once we tally the amounts spent on Blk 25’s 2 TNRM rounds, we will report the remaining resources in our Sterilisation Fund.