Last week, we received calls, SMSes and an email from Mark, who wanted to adopt Woody, together with his girlfriend Chiu Yen. Both of them live together in Chiu Yen’s condo in Yishun with no other house-mates or family members. We reviewed their answers to our questionnaire and spoke to Mark over the phone. They arranged a visit with us for Friday evening.

When they saw how active and playful Woody was, we discussed the pros and cons of Woody being adopted together with another kitten as they currently have no other cats in their house. Kittens when adopted alone tend to need more personal and play time with their owners. Kittens with a playmate will have someone to learn play-hunting with and will feel less lonely, and thus less destructive. We also discussed the financial costs of two versus one, and apart from veterinary costs: vaccinations and sterilisation, food and litter won’t be a drastic up in expenditure because they can be bought in bulk. 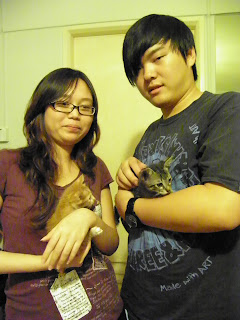 Chiu Yen and Mark asked us a lot of questions about kitten care which we were more than happy to answer. We covered issues on litter training, mandatory vet visits, feeding, among others. One of the many questions they asked was about clipping kitty claws, and we said that a cat claw clipper comes with instructions, and we showed that if cats strop on a scratching post, their older nails will fall off – we even had a ‘sample’ of a stropped-off nail on our cat condo. We also talked a lot about cat body language, for instance how to tell if they were ill, and showed them an example of the third eyelid using Junie as example. Their windows and doors are always fully closed, but Chiu Yen asked about what to do if the kittens want to run out when the humans were going in and out of the house – we shared with them tips on how to prevent that from happening, and also suggested ID tags for the kittens.

After going through their questions and briefing them on the important stuff, we went through the adoption contract and its terms. They were very agreeable on all the terms, and expressly vocalised their consent to house visits (Term 5 of our contract) which the rescuers of Woody and Palette were keen on doing after the adoption, so we had to make doubly sure they were agreeable to that.

We also asked them a lot about their families – all are living overseas since Chiu Yen is a PR citizen originally from Taiwan and Mark is from China here on a student visa. For young adults, parental objection to pets is a big issue, and we feared that the kittens will get thrown out and abandoned if parents visit. We also wanted to know what their plans were regarding staying in Singapore after they finish their studies and when they were working. Both are staying in Singapore for long-term – Mark also has a house of his own here though he chooses to live with Chiu Yen in hers. Over the phone before they visited, we even queried on what would happen to the cats if Mark should decide to live apart from Chiu Yen in his own home instead – they said the kitties would stay with Chiu Yen if such an eventuality happens. A lot of personal questions were asked by us, and willingly answered by them! After clearing a lot of queries for us on the aspects of parents, finances, residency plans, we felt more at ease in re-homing Woody and Palette to them.

Both of them are also very loving towards kittens in the way they handled and talked to them. They asked all the right questions and agreed to take Woody and Palette to the same vet who first vet-checked them, The Animal Clinic, at the Clementi branch even though it wasn’t all that near for them living in Yishun. Being first-time kitty parents they wanted to go to a vet that we recommended to cover all their bases.

After the kittens went home with them together with some bundles of pine litter, Solid Gold Indigo Moon kibbles and 2 cans of Nutripe Chicken, we kept the communication open with them through Mark. He called that evening to say that Woody was purring at them! His own cat in his childhood never purred, so it was a new experience for them.

The next night however, Mark and Chiu Yen noticed that Palette was falling ill – they had learned from the visit the visual cues of what a sick cat may look like. He was having diarrhoea, and looking lethargic and eating very little – sounds like how Palette was when he first arrived at our foster home. We advised them to bring Palette to the vet as soon as possible (vet was closed on Sunday) and will hear back from them when Palette has seen the vet. We hope little Palette will get well soon!