Update 22 April: Jay has returned to our foster home. It turns out his first adopter’s flatmate wasn’t as understanding as she initially claimed to be and got upset with Jay after he play-scratched her (Jay’s claws are not long at all). Joleen decided that Jay ought to live in a household with better humans as she could not resolve the issue with her flatmate who asked Joleen to get Jay to move out. He is fine and has no stress symptoms from the ordeal.

Jay, who arrived at our foster home on Sunday, has already been adopted! He will be going to his new human parent Joleen’s house in Yishun tomorrow. 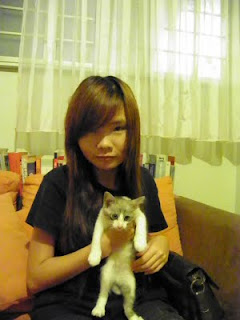 Joleen’s old family cat who passed away a year ago when she was living with her parents and relatives looks a lot like Jay. Joleen currently lives on her own with an approving and cooperative flat-mate, and works from home – good for attention-seeking Jay who loves human interaction.

We are happy that Joleen and Jay have found each other!