Our volunteer team members are matched to portfolios that not only interest them and play to their strengths, but also develop them personally and professionally. Passion that reaps its rewards is what makes for a sustainable volunteering career. Here is the story of one of our Foster Care Volunteers, Riley.

From a very young age, I have always loved animals. My mother used to tell me a story from when I was two years old. When I would go out with my mother, I used to love to try and pet every stray animal that I saw. It didn’t matter whether it was a cat or dog. I simply wanted to share my love with the animals I encountered. One day, a dog tried to bite my hand off, but my mother pulled me away in time. I was bit startled, but unfazed, so I continued to play around with stray animals and my love just continued onwards.
I had always wanted to have a pet, but the day did not come until I was twelve years old. My mother’s friend and I brought home a gorgeous three-year-old female Basset Hound, whom I fell in love with at first sight. My second dog came along a few years later. Having animals in the house was amazing. Their unique personalities and beautiful faces just lit up my days. When my older one passed, it was one of the most painful experiences of my life and to this day, it makes me sad to think of the day I received the awful news.
My love of animals even extended to my eating habits. When I was thirteen, I decided to stop eating meat. Giving up beef was easy because I was scared of Mad Cow Disease. Giving up the other meats came about mainly when I thought about how the animal ended up on my plate and the suffering it had endured. Then, at the age of sixteen, I gave up seafood, when I realized those animals also suffer when they are killed. Finally, several months ago, I decided to become a vegan because I had learned more about dairy and egg farms, and I just hate the idea of any animal suffering on my behalf.
When I was younger, I had played around with the idea of becoming a vet, but never taking it too seriously because I was always weak in science when I was in school. Over the years, I wanted to volunteer at animal shelters back in New York, but I was too consumed with many things in my life. When I got to Singapore, I had the urge again to volunteer, so this time around, I went ahead and volunteered.  I had had enough of spending all my time being too involved in my day job, which I didn’t like very much anyway. I needed more happiness in my life.
I began to spend my Saturdays volunteering at the kennel for Action for Singapore dogs and at Love Kuching. I had always loved dogs and had the most experience with them, so volunteering at the kennel was an easy decision to make. Before joining Love Kuching, I had heard about it from a friend that had adopted her cats from there, but I was still unsure about adding to my volunteering schedule. Then, on one fateful night, I came across an injured cat, whom you all know as Nelly. My husband and I were the couple that passed the contact details of Love Kuching to the rescuers. That night changed a lot in me. Not only did I hate the fact that I did not know how to help Nelly, but I felt slapped in the face by the reality that I should just go ahead and make my love of animals into a career. That entire weekend, I was worried sick over Nelly until Elaine reassured me that she was fine. Over the course of that weekend, I had come to the realization that I want to make rescuing animals into a career and that I wanted to also join Love Kuching in order to help cats as well.
Currently, I am a Receptionist at a GP clinic and I have pretty much been in customer service my entire working career. Customer service has never been my passion. It’s just a role I’ve found myself in as a matter of convenience and also due to a lack of vision. The night of Nelly’s attack was a real kick in the butt for me and the experiences that I’ve had with all the cats and dogs I’ve met while volunteering have also opened my eyes.  In spite of having had an unlucky start at life, each dog and cat I’ve come across has shown to me a remarkable resilience. Without a helping hand, they would not have the chance to be so strong. I want to be one of those helping hands for animals in distress instead of merely crying about the situation. A career as a veterinary nurse would provide me with such skills to truly help, which is why I have ultimately decided that it will be my career choice.  Animals are precious and we should use our knowledge and open hearts to protect them from suffering. 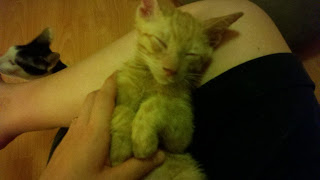 Gary sleeping soundly after his seizure. 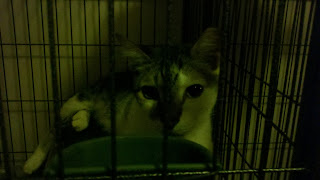 Balloon looking at me from his cage. 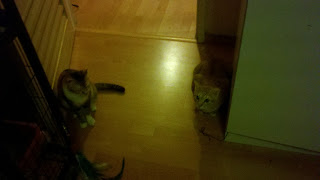 Playing with Sunkist and Teapot. 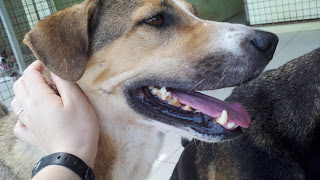 Gorgeous dog from the kennel being sweet as always. 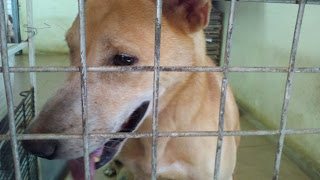 Treasure is always an inspiration. Thriving even with a permanent spinal injury. 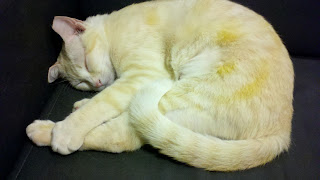 Nelly all curled up for a nice nap. 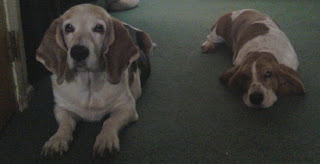